I always said I would run another marathon, and 2020 was the year I chose to do it – little did I know that I would end up training for 9 months for it!

I was lucky enough to be offered a charity place in December, to run the London Marathon for Autistica, a charity which carries out research into autism, and support individuals and their families who are living with autism. And so with equal amounts of fear and excitement, I accepted the place.

I began training in January, thinking that the cold, dark morning long runs would be the biggest hurdle I would face, and all was going well (aside form a few races being cancelled thanks to Storm Ciara!) until it was announced in mid-March that the normal event would be postponed until 4th October. This put a lot of runners into a bit of a state of limbo, should we have a break and pick up training again towards the end of the summer? Should we keep up the momentum seeing as a fair amount of miles had been clocked up already? Me and my Autistica team mates decided that we would run our own virtual marathon when restrictions were lifted and we could actually run together. This however, proved difficult logistically but instead we each individually ran our own marathons to ensure our hard work had not gone to waste. I ran into London, marking the half way point as the Mall, the finishing straight of the London Marathon, which felt fitting.

It was then announced that the event on 4th October would now be a virtual marathon for the masses, and so I had a choice to make, did I want to run a second marathon within 6 weeks of completing another? This sounds insane I know, but it seemed like a shame not to participate, even from afar, and I do like a medal (sad I know!)! So I continued my training, albeit with slightly less intensity, and this time I enlisted some running partners so I wouldn’t be going it alone again. I planned my route to stay more local, hoping a few friends might give me a wave and a jelly baby along the way! It felt like such a shame that the main event would not be happening as it would normally, and I felt like I was missing out, as I have always loved London Marathon day and the whole atmosphere, whether a spectator or runner, or just watching on TV, has always had a special feel about it, and since running my first and only other marathon back in 2011 in London, I really wanted to experience it again.

Race day arrived, and there was only one word to describe it. Wet! It was pouring with rain and had been all night, so the prospect of getting up and running in the dark and the rain was not filling me with joy! I obviously did though, and I can honestly say I loved it, from start to finish. It was a run of two halves, the first taking me from rainy Chislehurst to rainy, windy Greenwich. We had a few beeps and cheers from cars and passers-by along the way, but as we ran along Shooters Hill Road towards the park, we saw a fair few other runners undertaking their own personal marathon, some running solo, some with a support crew, but all with the same drive and genuine support for fellow participants, it was just amazing. As we entered Greenwich Park, Super Mario ran in the opposite direction, complete with moustache! After running round the heath and back towards Blackheath village, one of my friends popped up out of nowhere with those jelly babies and water, such a lovely surprise and a much needed boost. Back towards Chislehurst and a couple of other friends had come to cheer me on, and when I got to my half way point, I had so much support (and a clean and more importantly, dry t-shirt), exactly what I needed to take on the second half with my new running partners. We headed out towards Locksbottom this time, the car beeps and cheers prevailed, more friends made the effort in soggy conditions to see me, and we saw yet more runners taking on their own challenge. 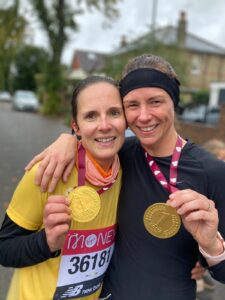 As we neared the end of the ‘race,’ we figured out that we would finish on Mead Road, and let our husbands know in the hope that they might be there to greet us at the finish. Little did we know that by the time we turned the corner at the bottom of the Meadow and into Mead Road, there would be a full on fan club waiting for us, complete with a makeshift finish line, London marathon music, home made signs, and chocolate medals! It was honestly so unexpected and overwhelming, it felt so much more special than it would have been had I have done the ‘real thing.’ Having so much support the whole way along the route was so uplifting and really did motivate me to keep going, and I am so appreciative of everyone who came out, cheered, beeped, just or gave me a thumbs up. 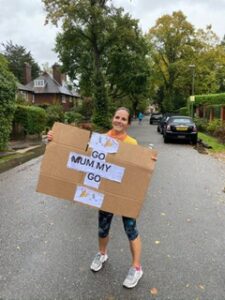 In a year that has been so uncertain and difficult in so many ways, this event has created something positive for so many, raising much needed funds for lots of charities that have lost out on the funds they would normally rely on from events such as the London Marathon. The spirit of the London Marathon was present on the day in abundance, making the 40th race one to remember, and it is a day that I certainly wont forget for a long long time to come!